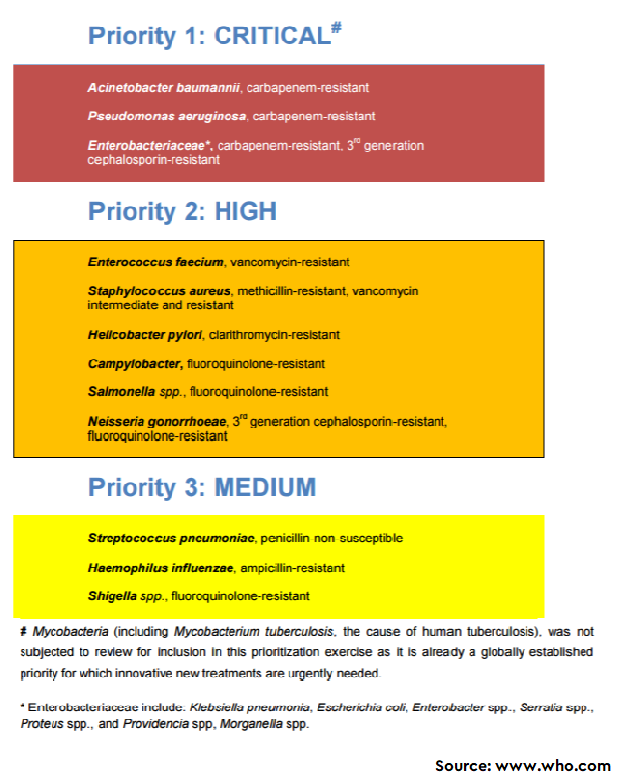 The Global Action Plan is one of the key initiatives by the World Health Organization (WHO) to combat the increasing incidence of antimicrobial resistance (AMR). In this direction, WHO has articulated a list of pathogens under the umbrella of ‘priority pathogens’ to provide strategic direction to research and develop new antimicrobials. Basically, twelve families of drug-resistant bacteria, posing the greatest threat to human health, were categorized as critical, high, and medium priority organisms, in terms of their resistance to selected antimicrobials. However, it is possible that the list varies from country to country (Link). The availability priority pathogens list at country level will direct the researchers to focus on key pathogens. Having said that, India, being one of the highest consumers of antibiotics in the world must work in this direction.

Out of 12,256 culture specimens, 2335 (19%) showed culture positivity having the presence of priority list of pathogens in 1556 specimens. Results showed the presence of 72% of E. coli and 63% of Klebsiella spp. resistant to 3rd generation cephalosporins due to extended-spectrum beta-lactamase (ESBL), and 53% of the Staph. aureus to Methicillin. Overall, nearly half of Enterobacteriaceae were resistant to carbapenem (46%) or 3rd generation cephalosporins due to ESBL (55%). The carbapenem resistance in Pseudomonas aeruginosa was found low (5%). While three of the WHO ‘High priority’ pathogens and one of ‘Medium priority’ pathogen, Haemophilus influenzae (ampicillin-resistant), was not observed in this study. In conclusion, it seems that large health facilities must monitor their data to guide local priorities, policy, and practices for the optimal use of antimicrobials and better health outcomes.

Efforts to Identify and Combat Antimicrobial Resistance in Uganda: A Systematic Review

Why do hospital prescribers continue antibiotics when it is safe to stop? Results of a choice experiment survey