Antibiotic resistance (ABR) is rising to dangerous levels in all parts of the world. New resistance mechanisms are emerging and spreading globally, thus threatening our ability to treat common infectious diseases. With 700,000 people losing battle to antibiotic resistance per year and another 10 million projected to die from it by 2050, ABR alone is killing more people than cancer and road traffic accidents combined together. Economic projections suggest that by 2050, ABR would decrease gross domestic product (GDP) by 2-3.5 per cent, with a fall in livestock by 3-8 per cent, costing USD100 trillion to the world. Without urgent prevention and risk management actions, we are heading for a post-antibiotic era, in which common infections and minor injuries would kill.
This antibiotic-resistance crisis is mainly attributed to the expanded utilization and misuse of medications – including the overuse of antibiotics in livestock and farming production – overpopulation, upgraded worldwide relocation, poor sanitation, poor sewerage transfer framework, improper disposal methods of antibiotics – which degrades the environment – as well as a lack of new drug development by the pharmaceutical industry.

What is antibiotic resistance?

Antibiotic resistance (ABR) is one of the major global threats to human and animal health, food security and, consequently, development. As per the WHO remarks, ABR is present in every country and is increasing on daily basis. The antibiotics are used to prevent and treat bacterial infections. However, at times, these antibiotics become less effective when bacteria transform in some way thus reducing or eliminating the effectiveness of drugs, chemicals, or other agents designed to cure or prevent infections.  These transformed bacteria are sometimes referred to as “superbugs” and the condition is termed as “Antibiotic Resistance”. It is well known that infections caused by these superbugs are harder to treat. The situation becomes worse when these infections get spread to patients, leading to adverse clinical outcomes, longer stay in hospitals and even death.
One of the major contributing factor to ABR is the misuse and overuse of antibiotics both in humans and animals. Common examples of misuse include when people consume antibiotics for viral infections (like colds and flu) and use antibiotics as growth promoters or as disease prevention in healthy animals. Antibiotic-resistant-bacteria are found in people, animals, food, and the environment (in water, soil and air) and can easily spread between people and animals, including from food of animal origin, and from person to person. Also, poor infection control, inadequate sanitary conditions and inappropriate food-handling encourage the spread of antibiotic resistance.
There is a growing list of infections – such as pneumonia, tuberculosis, blood poisoning, gonorrhoea, and foodborne diseases – that are becoming harder, and sometimes impossible, to treat as antibiotics become less effective. For instance, also common bacteria – such as Klebsiella pneumoniae and Escherichia coli – have acquired resistance to antibiotics and, as a consequence, their treatment is now ineffective in more than half of patients; people with methicillin-resistant Staphylococcus aureus are estimated to be 64% more likely to die than people with a non-resistant form of the infection. Also, medical procedures such as organ transplantation, cancer chemotherapy, diabetes management and major surgery (for example, caesarean sections or hip replacements), become very high-risk without effective antibiotics for prevention and treatment of infections. 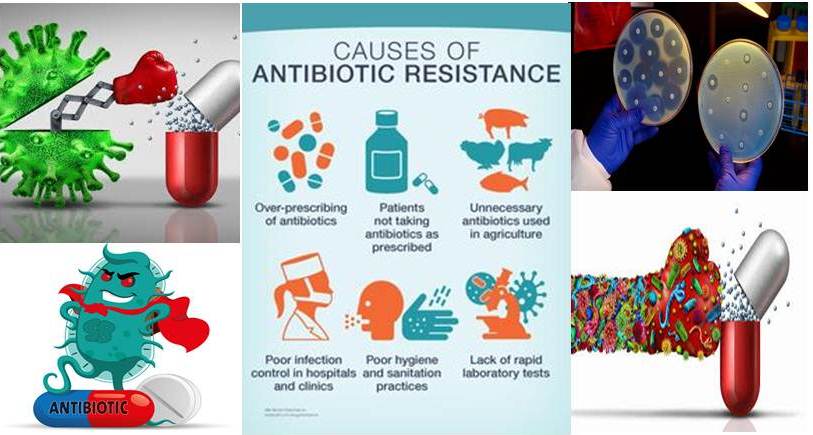 According to a recent statement of the Indian Ministry of Health and Family Welfare, historically antibiotic resistance (ABR) did not receive adequate focus and attention in India. Moreover, India is among the nations with the highest burden of bacterial infections: at the present time, the crude mortality from infectious diseases in India is 417 per 100,000 persons. A report by the Indian Council of Medical Research done in 2018 listed most frequently occurring ABR pathogens in India, i.e. Enterobacteriaceae (E. coli, Klebsiella, Proteus), Gram positive (S. aureus, Enterococci) and fungal pathogens (Candida, Cryptococcus, Aspergillus) etc. The diseases caused by these organisms are varied, i.e. respiratory, diarrhoeal, septicaemia, enteric fever, etc.  The study carried out to find the region-wise distribution of ABR pattern of E. coli in Sikkim showed the resistance level ranging from 92% to 37% with Ampicillin and Tetracycline, respectively. It is heart-breaking to note that India ranks first among all countries of the world in total consumption of antibiotics for human use. The top 5 states in antibiotic consumption in India are Goa, Delhi, Uttar Pradesh, Punjab and Kerala.
In addition, unsafe disposal practice of medicines by pharmacists, hospitals, homes, etc. in India is making a great contribution to the current situation. The researchers have found that at some places the concentrations of antibiotics in Indian water sources were higher than in the blood of patients taking antibiotics. As a result, communities living in these areas are experiencing high levels of mortality due to ABR. These communities – along with the fauna – could become agents for global pandemics.
In short, the PREVENT IT preliminary study has identified the following problems:

In August 2016, during the traditional Sundays’ radio speech – the Prime Minister Narendra Modi has introduced ABR as priority for the national government: “The habit of taking antibiotics can create a big problem. Government is committed to stop antibiotic resistance”. As follow-up action in April 2017, the Indian Ministry of Health and Family Welfare – in cooperation with the World Health Organisation – has presented the National Action Plan on Antimicrobial Resistance 2017-2021. PREVENT IT matches the aims and objectives of the National Action Plan, namely:
In addition, PREVENT IT is in line with two Indian flagship governmental policies: