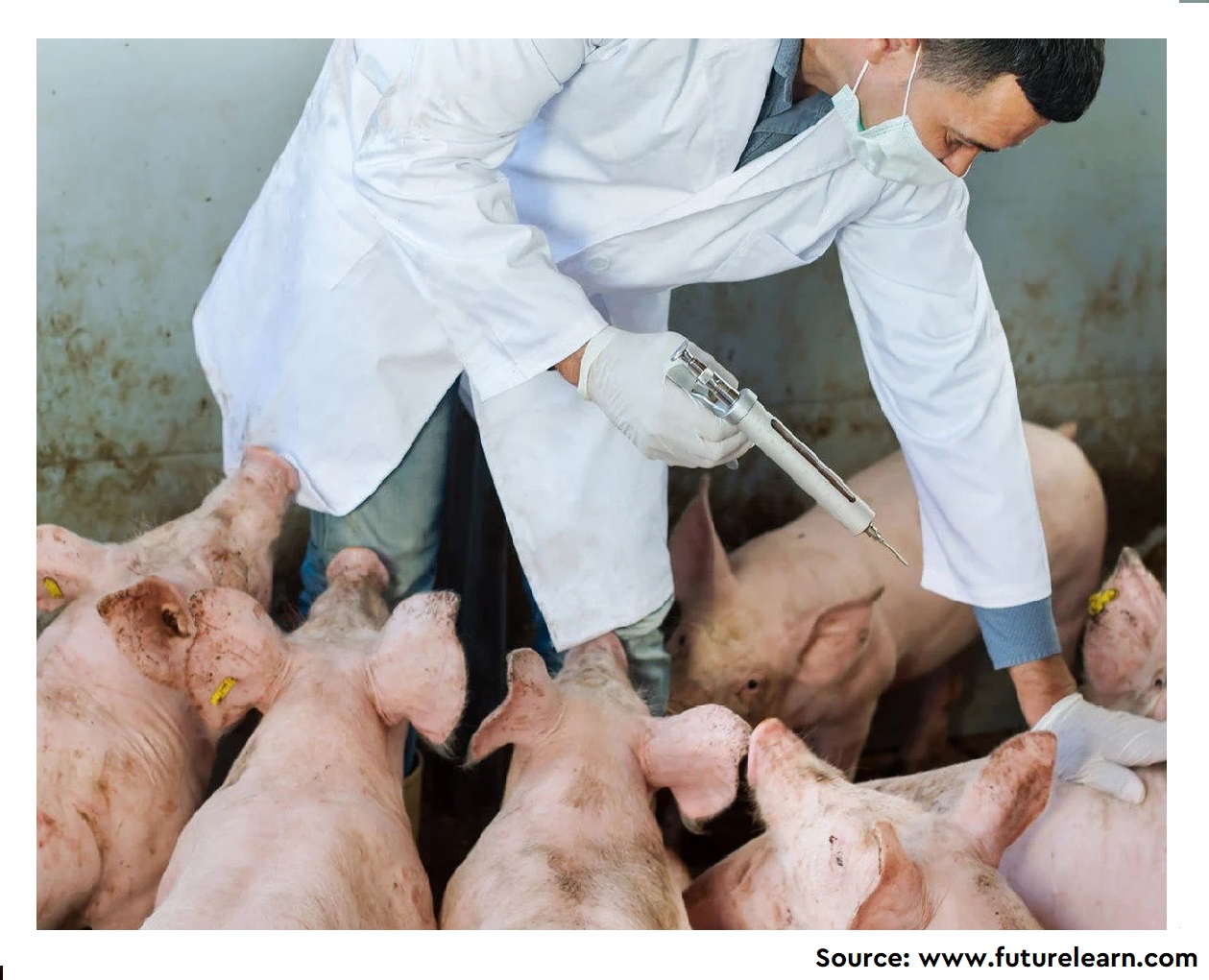 Access to enough safe and nutritious food is key to sustaining life and promoting good health. Thus, food safety seems to be the major point of concern and the reason behind foodborne diseases must be looked at carefully. The more concerning issue is the development of non-responsiveness of these disease-causing organisms towards available antibiotics that were initially used to kill them. This finally will result in the unsuccessful treatment of food-borne infections and thus, high mortality, prolonged illness, and reduced livelihood and food security. One of the major reasons behind the non-responsiveness of microbes is due to the misuse of antibiotics in animals. It is currently projected that the use of antibiotics in food animals will rise by 67% by 2030, two-thirds of which is expected to be used in intensive food animal production. Of all, the pig and poultry production are expected to double as the demand of meat is on rise. Therefore, it is crucial to study the distribution of these disease-causing resistant bacteria in the food chain.

In this regard, a recent study in South Africa by Badul et al. (2021) tried to study the distribution of Enterococci, are opportunistic pathogens serving as reservoirs of resistance genes, using a farm to fork approach. Basically, the samples were collected from the growth period on the farm (fresh pig feces and wastewater/slurry), transport (truck swabs), abattoir (carcass swabs, carcass rinsate, and caecal contents), and retail meat (body, head, and thigh). The result of the present study highlights the prevalence of enterococcal species, including multidrug resistant (MDR) ones that harbored resistance and virulence genes in different permutations and combinations. A total of 284 isolates, consisting of 79.2% E. faecalis, 6.7% E. faecium, 2.5% E. casseliflavus, 0.4% E. gallinarum, and 11.2% other Enterococcus spp., were collected along the farm-to-fork continuum. The isolates were most resistant to sulfamethoxazole-trimethoprim (78.8%) and least resistant to levofloxacin (5.6%) and few of them were MDR as well.

From the present study, it can be suggested that intensive pig farming can act as a reservoir for the potential transfer of these antibiotic resistant bacteria from pigs on the farm to occupationally exposed workers on the farm via direct contact with animals. The authors clearly highlight the need for more robust guidelines for antibiotic use in intensive farming practices. Also, the necessity of including Enterococcus spp. as an indicator in antibiotic resistance surveillance systems in food animals is expressed.

For more information, please visit the website of Microorganisms (Link).

Antimicrobial use in food animals and human health: time to implement ‘One Health’ approach